These photos are from two incidents that happened to ZK-ORN, a Jabiru J200
Microlight Class 2 aircraft at Martins Bay in the North Island of New Zealand.

The facts that I know are from my own PERSONAL eyewitness accounts only, as the CAA will be following up with their own investigation I'm sure.

1. ZK-ORN was flying from Ardmore Airfield to Whangarei when it en-counted engine problems causing it to stop.

3. The fault seemed to be a Fuel Problem.

4. After the fault was addressed by the pilots, the public were cleared from the beach by the police so the pilots could takeoff again. The tide was coming in at the time.

5. A takeoff attempt was made, but ended in a crash after the left hand rear wheel ran into the waters edge causing to pull the plane further into the water and causing the propeller to hit the water snapping off one blade making the aircraft almost most flip and rotating 90 degrees to the left, very quickly and stop resting on right wing.

6. Beach goers raced to the rescue and righted the aircraft and both pilots got out uninjured with no injuries apparent and walked away from it. Both very lucky.

The next 7 photos are from the Takeoff Attempt. 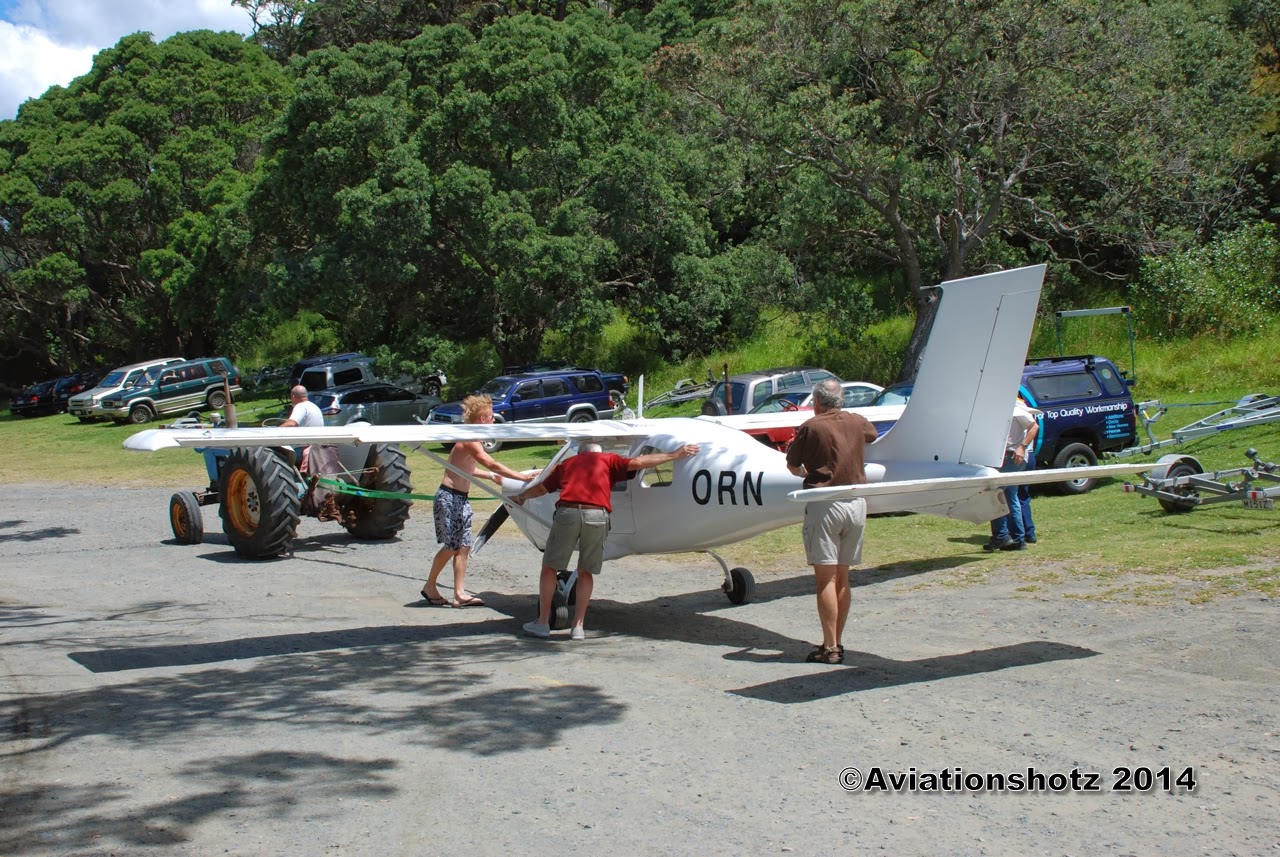 Email ThisBlogThis!Share to TwitterShare to FacebookShare to Pinterest
Labels: Microlights

China Eastern Airlines operated a special flight down under to Auckland arriving yesterday the 28th Jan direct from Pudong as MU7069 touching down at 7:07 pm

This special Chinese New Year Flight was operated by B-6121, an A330-200.
It returned back to Pudong later the same evening.

I was lucky enough to get some photos of N171UA in Sydney, and this was most likely my last chance get some shots in SYD of a UA B747-400.

Note in these photos, No.4 Engine is sporting a Grey Engine Cowling....

Email ThisBlogThis!Share to TwitterShare to FacebookShare to Pinterest
Labels: B747-400, Sydney, United

I was on location just before sunset to capture these photos of Air Freight NZ's Convair CV580 ZK-KFL taxing out for takeoff on very warm summers evening on another freight run down the country.

These photos are of CareFlight's Australia Augusta 190E Helicopter, VH-ZCF over the Sydney Harbour.

CareFlight has been operating since 1986.

Keep up the good work guys.

For more information on Careflight and it's service, see HERE

Email ThisBlogThis!Share to TwitterShare to FacebookShare to Pinterest
Labels: Helicopters

Seen here on push back in Sydney from the cargo terminal is 9M-MUA
operated by MASkargo.

Email ThisBlogThis!Share to TwitterShare to FacebookShare to Pinterest
Labels: A330-200, Freighters, Sydney

A Tail and a Winglet - ZK-NCJ

Took these shots late in 2013 on my way to SYD on NZ101.
My ride for the 3hr 25 minute flight was ZK-NCJ.
It was actually my first flight on an Air New Zealand's B767-300 since the winglets have been fitted throughout the 5 remaining in their fleet.

A shot taken on a rather dull and and wet day of, a couple of competitors, Air NZ and Jetstar. Air New Zealand's new Sharklet A320 ZK-OXB taxi's out and Jetstar's VH-VFJ taxi's in.

Email ThisBlogThis!Share to TwitterShare to FacebookShare to Pinterest
Labels: A320, A320 Sharklet, Auckland

Well as announced by Air New Zealand and Singapore Airlines yesterday the 16th Jan, that they are to form an Alliance, which will see Air New Zealand to restart flying their own metal once again to Singapore after leaving that route in 2006, and the introduction on the AKL run of the A380 by SQ during the peak season. Good news all round I reckon.