Well at last I finally made it to an Air Show that I have always wanted to attend, held each year in October, the

The theme for this years show was, "Marines in Flight: Celebrating 50 Years of Space Exploration"

So here goes, and I hope you enjoy the photos over the coming weeks.

These first photos are of the Blue Angels Start up, Taxi Out and Take off Departure. As with the precision and timing that the Blue Angels are know for, This was all started on-time at 1445 hours.

History in brief of the Blue Angels:

The Blue Angels performed their first demonstration in June 1946, at their then home base, Naval Air Station (NAS) Jacksonville, Florida using the Grumman F6F Hellcat.
In 1947 the team introduced the now-famous "Diamond Formation" led by LCDR Robert Clark.
In December 1974 the team began to fly the A-4F Skyhawk II.
On November 8, 1986, the Blue Angels completed their 40th anniversary year when they unveiled their present aircraft, the F/A-18 Hornet.
The Blue Angels are currently based at (NAS) Pensacola, Florida. 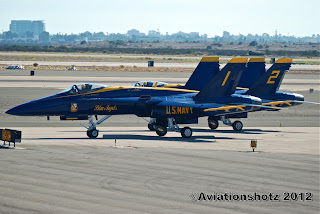 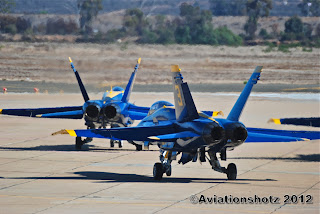 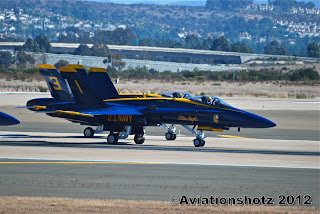 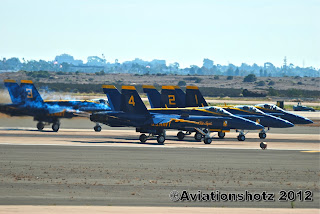